Recently there is a crop of cases involving fathers' rights campaigners in which UK law does not seem to be applied equally. In the cases of the prominent campaigner and father Tim Line, as well as the founder of Fathers 4 Justice F4J Matt O'Connor, the law seems to be operating differently.

Similarly the author brought an action for defamation against the well known feminist family law barrister, Lucy Reed, in the Bristol County Court which includes aspects that may also apply to both cases involving Tim Line and Matt O'Connor, as well as fathers more generally seeking to act as litigants in person.
.

The introduction of the Human Rights Act means UK law now consists of a mixture of a written constitution and case laws or 'precedents'. The Human Rights Act makes it unlawful for any public body to act in a way which is incompatible with the Convention. It also requires the judiciary to take account of any decisions, judgement or opinion of the European Court of Human Rights, known as the Strasbourg court, and to interpret legislation, as far as possible, in a way which is compatible with Convention rights.

The action brought in the Bristol County Court hinged on whether the applicant has lawful permission to publish the County Court judgments from his family proceedings?

In Bristol, before a Deputy Judge, counsel for Lucy Reed stated on record, also transcribed in the official judgment, that there was no such permission and therefore the claimant was guilty of contempt which is punishable with imprisonment.

A similar situation has arisen in the case of Tim Line who has consistently argued that the lawyer representing the other side lied on oath. His situation is more complicated because the application was made in a Magistrates Court and although witnesses saw a transcript taken at the time no official record is currently available.

This is not the same as the author's own proceedings because the Deputy Judge referred to the assertion made by counsel for Lucy Reed in his judgment which is an official record. Also in his evidence the author included a copy of the original Court of Appeal order granting him permission to publish the relevant judgments as well as, crucially, a judgment from Lord Justice Scott-Baker in separate proceedings also citing the decision.This second judgment is significant because it means there should be no ambiguity.

However instead of allowing an appeal on the grounds that the Deputy Judge was misled by counsel for Lucy Reed permission to appeal PTA was refused. This meant Bristol County Court ignored the previous judgments from the Court of Appeal in favour of the new order made by a Deputy Judge.

This decision is unlawful because UK law does not allow judges to pick and choose which court orders they want to recognise. According to the doctrines of stare decisis and ratio decedendi the Deputy Judge was obliged to follow the decision taken by judges in the higher court. The miscarriage is reinforced by the fact that the author had already faced two separate applications for a custodial sentence; firstly, for publishing the judgments which was not upheld, and, secondly, for publishing the 'evidence' contained within those judgments for which he received a suspended prison sentence that was quashed on appeal.


Because permission to appeal PTA was refused the only recourse available was to make an application in the High Court for a Judicial Review. The application was heard by Mr Justice Holman who could see there was a mistake but instead of ordering a substantive hearing, adjourned the proceeding to be heard by a different judge. The new judge was not so patient and dismissed the application which was also discharged without a hearing in the Court of Appeal and the European Court.

Despite this miscarriage Lucy Reed applied to the Southampton County Court for the costs for these proceedings around £7,500. Therefore because the author had exhausted the civil remedy for defamation he turned to the police to report the crime of perverting the course of justice in much the same way as Matt O'Connor.

It is unjust for Lucy Reed to claim this money when she is aware that the author has the relevant lawful authority to publish the judgments and only obtained a decision in her favour by commission and omission, in other words, by instructing her counsel to lie to the Deputy Judge in Bristol and failing to correct the falsehood twice in the High Court.

Unfortunately according to the Somerset and Avon police report completed by Inspector Sweeting,

I have serious doubts about whether it would be appropriate for the police to investigate when you take into consideration the fact that six court of appeal judges have looked at the case without ruling in Mr Miller's favour.

But Inspector Sweeting must know the opposite is true. According to the evidence six court of appeal judges have looked at the substantive issue and ruled in the author's favour not against him and Inspector Sweeting as well as the Independent Police Complaints Commission is turning a 'blind eye' to a point of law which is an allegation made against the police by Matt O'Connor.

Unlike Tim Line and Matt O'Connor the author has also represented himself in his family proceedings in front of Baroness Hale in the Court of Appeal, before she was made Deputy President of the Supreme Court. Baroness Hale is now the second most senior judge in the country and the author was able to put before her ladyship a copy of his book which included a section specifically dealing with this point of law. Not only did Baroness Hale read the book she made minor corrections to the text so there can be absolutely no doubt about this point of law.

These cases have profound implications. The law is the law because it applies equally to everybody. These example show how the judiciary are using the force of the police to apply their own wishes on an ad hoc basis. This is neither formal justice nor lawful but a form of 'bullying'.

2010 Debate on fatherhood at the Houses of Parliament - VIDEO 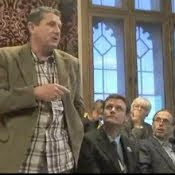 Buckingham Palace - 'Her Majesty has noted your concerns' 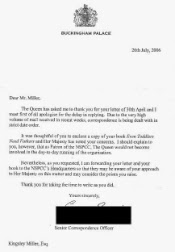 Interview - 'Dads on the Air' - Australian guidelines for toddlers - RADIO

"It was thoughtful of you to enclose a copy of your book 'even Toddlers Need Fathers' and Her Majesty has noted your concerns"
Buckingham Palace, 26 July 2006 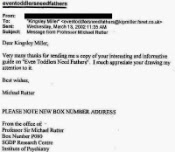 "Thank you for taking the trouble to send the paper. I shall absorb it with much interest". 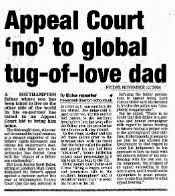 98,691 views
"I am very grateful to all those, like yourself who have written and particularly where you have been able to demonstrate your own thinking from the experiences you have had. Congratulations on your battle"
The former Home Secretary, and dad, David Blunkett, 22 March 2005​

Copy of the suspended custodial sentence quashed on appeal 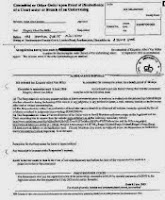 "Very many thanks for sending me a copy of your interesting and informative guide on 'even Toddlers Need Fathers'. I much appreciate your drawing my attention to it"
Professor Sir Michael Rutter, 13 March 2002 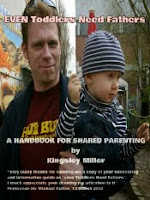